Wilmington, DE – Having successfully led the Department of Labor’s efforts to support Delaware workers during one of the most challenging times in the state’s history, Secretary John McMahon announced today that he would retire to spend more time with his family. An effective date, as well as Governor Markell’s nominee to replace him, will be announced in the coming days.

“John’s work has driven tremendous progress throughout the Department of Labor, while dealing with the unprecedented demands for Department services during a time when so many workers needed assistance as a result of the Great Recession,” said Markell. “Importantly, he has also played a vital role in helping our state tap into the talents of groups who were too often unable to access the employment opportunities they deserved, from recently returning veterans to people with disabilities. I am grateful for John’s passionate service and wish him and his family the best in everything that comes next.”

One of the signature accomplishments of Secretary McMahon’s leadership involved the vast improvement of Delaware’s online resources to support workers in improving their resumes and identifying job openings, while assisting employers in finding well-qualified Delawareans to fill company needs. Tens of thousands of workers have used these services, with more than 60 percent of Delawareans who use the services of the Division of Employment and Training now gaining employment within 90 days. That’s up from 42 percent in June 2010.

In the state’s new resume builder application, workers input their skills and experiences into a program that churns out a professional resume that more clearly indicates their strengths. Employers can then search the database for the people who are most likely to fit in their companies. In addition, the Department has launched web-enabled career lattices focusing on the manufacturing, IT, finance, retail, and hospitality sectors. These tools give workers an easy way to determine jobs for which they qualify in growing fields and the skills they need to acquire to help advance their careers.

“It has been my highest honor to lead the Department of Labor and the truly dedicated and committed staff who worked tirelessly throughout the Great Recession,” said McMahon. “I am grateful to Governor Markell for this incredible experience and for the chance to be part of the dedicated efforts of so many state leaders to support our citizens through both recession and recovery. While it is not easy to leave the many Labor employees who work so hard every day on behalf of our state, this job demands a tremendous commitment and I feel it is necessary to step down to have more time to spend with my family.”

Dover, DE – Having helped rebuild Delaware’s economy from the depths of the Great Recession to record employment numbers and the best job growth in the region, Economic Development Director Alan Levin announced today that he would leave the Markell Administration at the end of the year’s legislative session to pursue a new business opportunity. 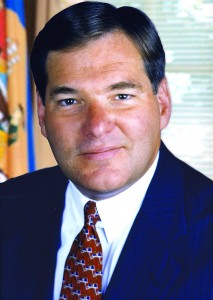 Beginning in July, Levin will join SoDel Concepts, the successful restaurant and hospitality group in Sussex County started by his late friend and mentor Matt Haley. He will serve as Senior Advisor to the management team to help take their successful Delaware company to the next level in a dynamic industry.

“Alan took his position at a particularly challenging economic time,” said Markell. “Alan has shown great leadership during six years that have been marked by great progress in recovering from the Great Recession and addressing the challenges of the 21st century.”

“Successfully improving the economy since 2009 has required a relentless pursuit of opportunities to attract new companies and support existing ones, as well as an ability to recognize and adjust to the forces of globalization and technological innovation that are shaping today’s world. Alan excels in all of these areas and I’m forever grateful for his tireless service to our state and for his long-term commitment to the Administration.”

Levin has led the Delaware Economic Development Office (DEDO) since Governor Markell took office in 2009, at a time when tens of thousands of Delawareans were losing their jobs as result of the national economic crisis. As the Administration’s top priority focused on putting people back to work, the state’s initial economic development successes included re-opening the shuttered oil refinery in Delaware City and attracting new manufacturing and other economic development to the site of the old Chrysler plant in Newark.

“I would like to express my gratitude to Governor Markell for the opportunity to serve the people of Delaware during this very difficult time in our state’s history,” said Levin. “From the start it has been challenging, but I am pleased to say that we are in a much better place than when we started and the outlook for our citizens in the years to come is much brighter because of the hard work of the staff at DEDO. While I leave with mixed emotions, the opportunity to perpetuate the great work of entrepreneur and humanitarian Matt Haley will allow me to continue service to the people of Delaware in different but equally rewarding ways.”

At 4.4 percent, Delaware has had the fastest job growth in the Mid-Atlantic over the past two years, also exceeding the national average of four percent. Meanwhile, the state’s unemployment rate has fallen to 4.6 percent, the lowest in the region, and average annual wages have increased more than nine percent since 2009, among the best in the region.

In releasing its job creation index for 2014, Gallup noted that Delaware had gone “from one of the lowest-ranking states in 2008 and 2009 to one of the top-ranking in 2013 and 2014. Delaware holds the distinction of being the only state anywhere along the Eastern seaboard to be in the top 10.”

In addition, Delaware was recently recognized by The Information Technology and Innovation Foundation as one of the top two states best prepared for the new economy, which is “marked by globalization, technological innovation and entrepreneurial development.”

Markell plans to make an announcement about a nomination for the next DEDO Director in the coming days.