WILMINGTON, Del. – Governor John Carney on Friday joined members of the General Assembly and environmental advocates at a Wilmington-based solar array to sign three environmentally focused bills that will help expand the use of renewable energy, reduce carbon emissions, and protect Delaware’s fragile ecosystems from the harmful effects of plastic waste.

“It takes all of us working together to address the existential threat of climate change in our communities,” said Governor John Carney. “It is my pleasure to finish the great work of Senator Stephanie Hansen, members of the General Assembly and advocates across the state, and sign these important pieces of legislation to protect our state’s environment for future generations.”

“These measures – along with the updated Renewable Portfolio Standards signed by the governor in February – mark significant steps forward in Delaware’s energy policies and our stewardship of the natural environment,” said Senator Stephanie Hansen. “None of these bills would have been possible without input from dozens of environmentalists, community groups, businesses and advocates who were willing to put aside their differences to help forge policies that will lead to a healthier, cleaner and more sustainable Delaware.” 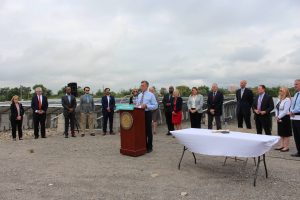 Signed at the site of a 2-megawatt solar array near the confluence of the Brandywine Creek and Christina River owned by Soltage LLC, Senate Bill 2 is designed to accelerate the adoption of community-based photovoltaic systems in Delaware.

The legislation creates a legal framework that will allow residents to enjoy the cost savings and low-carbon footprint of solar power without needing to install photovoltaic panels on their own properties. Instead, neighbors and community groups can receive a credit on their electric bill by subscribing to a centrally located community solar project, which can now be developed under a variety of ownership, management, and contract models.

Delaware law has allowed for community-owned solar generation facilities since 2010, when the shared solar concept was still being tested throughout most of the country. Today, at least 40 states and the District of Columbia host at least one community solar project with most located in Maine, Minnesota, New York and Colorado.

Under a regulatory process implemented by the Public Service Commission with consumer protections provided by the Delaware Department of Justice, SB 2 requires all community solar projects in Delaware to serve a diverse customer base that includes low-income and middle-class households — an environmental justice component that will ensure solar energy is available to all Delawareans.

“Senate Bill 2 addresses barriers to community solar development in our state,” said Drew Slater, Public Advocate. “This legislation was a collaborative approach with many stakeholders and through forums held by Senator Hansen. It is a testament to everyone’s hard work that this legislation received overwhelming support from the General Assembly and is enacted into law by Governor Carney this afternoon.”

“Soltage is excited to see Senate Bill 2 passed today, as we know first-hand the impact it will have on Delaware’s solar economy and community solar buyers,” said Soltage CEO and Co-Founder, Jesse Grossman. “This type of legislation is key for opening up clean energy markets, driving economic growth and job creation in the state, and ultimately, helping the country achieve the decarbonization needed to avoid the worst effects of the climate crisis.”

Governor Carney on Friday also signed Senate Bill 21, an amendment to the Delaware Energy Act that encourages the adoption of electric vehicles by creating a more accessible charging-station infrastructure in the First State. The legislation specifically allows state agencies to charge employees and the public a fee for the use of charging stations on state property so long as those fees do not exceed the agency’s cost.

Finally, Governor Carney signed Senate Substitute 1 for Senate Bill 24, legislation that makes it unlawful to intentionally release balloons filled with air or lighter-than-air gases. Releasing four balloons or fewer is considered littering and a first offense is punishable by a fine of at least $25. A mass release of five or more balloons carries a civil penalty of $250 and up to eight hours of community service on first offense.

The legislation – sponsored by Senator Stephanie Hansen and Representative Ed Osienski – will raise the percentage of Delaware’s energy that must come from renewable sources through 2035 and help confront the impacts of climate change. Increasing the Renewable Portfolio Standard also was a longtime priority of former Senator Harris McDowell.

“Delaware is the country’s lowest-lying state, and climate change is already having a very real impact,” said Governor Carney. “This legislation will help accelerate Delaware’s transition to renewable sources of energy, which is good for our economy and our environment, and I’m pleased to sign it into law.”

“Extending and updating the Renewable Portfolio Standard involves a few complicated mechanisms but one simple idea: the energy future in front of us looks very different from the energy past that got us here,” said Senator Hansen, D-Middletown. “By encouraging greater use of renewable energy sources, we can simultaneously stimulate innovation, encourage job growth, push for cleaner air, and find new ways to lower energy bills for Delawareans. That’s reason to celebrate and to keep pushing for progress. I’m proud to have sponsored this bill, building off the work of Sen. Harris McDowell, and I thank the governor for signing it today.”

“Companies’ practices have taken a heavy toll on our environment for far too long. Especially here in low-lying Delaware, where sea level rise is a top concern, it’s critical we take action to protect our natural resources and prevent further ecological damage,” said Representative Osienski, D-Brookside. “Renewable energy portfolio standards have proven to be an effective solution to transitioning away from harmful fossil fuels toward clean, green energy like solar, wind and geothermal. Because we’re on-target to hit 25% by 2025, it makes good sense to establish new goals for our RPS program.”

“Promoting the use of renewable energy is essential for continuing progress on meeting our targets for reducing greenhouse gas emissions, which are driving the climate change impacts we are already experiencing in Delaware, including sea level rise, increased temperatures and more frequent and intense storms, droughts and flooding,” said Shawn Garvin, Secretary of the Delaware Department of Natural Resources and Environmental Control (DNREC).

WILMINGTON, Del. – Governor John Carney and the Governors of Massachusetts, Michigan, Minnesota, New Hampshire, New Jersey, New Mexico, New York, North Carolina, Ohio, Pennsylvania, Vermont, Virginia, Washington, and Wisconsin issued a letter to the leadership of both the House and Senate Armed Services Committees urging them to include provisions for per- and polyfluoroalkyl substances (PFAS) in the Fiscal Year 2020 National Defense Authorization Act to protect citizens who would be affected by these substances.

As you instruct your conferees to consider the Fiscal Year (FY) 2020 National Defense Authorization Act (NDAA), we, the undersigned governors, would like to highlight several key provisions related to per- and polyfluoroalkyl substances (PFAS) and urge you to include them in the final legislation.

PFAS are used in many nonstick coatings in consumer products, industrial processes, and firefighting foams often used by the military and at airports. These chemicals, which break down extremely slowly or not at all, can accumulate in our environment and in our bodies, and those that have been studied are associated with adverse health effects, such as liver damage, thyroid disease, and kidney and testicular cancers. Provisions in the current House and Senate measures will ensure the U.S. Department of Defense (DoD) mitigates the impacts of PFAS contamination, require the U.S. Environmental Protection Agency (EPA) to move more quickly to set PFAS health standards and protections, and provide much-needed resources and guidance as the federal government, states, and communities work to address contamination from these persistent substances.

At current and former military bases across the country, firefighting foam containing PFAS has been in use for many years to meet FAA firefighting standards at FAA controlled airports, and by extension at military airports. In many of these locations, PFAS have leached into groundwater, surface water, and nearby private wells used for drinking water. According to the Government Accountability Office, there are at least 401 military sites with known or suspected PFAS contamination.

As governors, we are evaluating responses appropriate for our states, including in some cases developing or setting drinking water standards for PFAS, and deploying state funds to test, investigate, and remediate PFAS contamination caused by government and industrial uses. Nevertheless, federal action is needed to address PFAS, including contamination in and around military sites.

Our Congressional delegations have worked diligently to include important provisions in the House and Senate bills to require the DoD and EPA to investigate, monitor and clean up PFAS contamination originating from DoD activities. It is clear that many members of Congress on both sides of the aisle understand the urgent need to act to address these toxic PFAS chemicals. As governors whose residents are affected by these toxics, we urge development of a package that includes the strongest provisions from both the House and Senate bills, including the following that would:

The FY2020 NDAA presents an opportunity to take historic steps forward to address PFAS contamination that is harming our states, and we ask you to include the strongest PFAS-related provisions in the final bill.

View and download a copy of the Governors’ letter.

WILMINGTON, Del. – Governor John Carney and 23 other Governors of the U.S. Climate Alliance on Tuesday issued a joint statement announcing the “Nation’s Clean Car Promise” to protect citizens from vehicle pollution and to fight climate change. The following are excerpts from their statement:

“We, the undersigned 24 governors– a bipartisan coalition representing 52 percent of the U.S. population and 57 percent of the economy – stand together in calling for one strong, national clean car standard and support preserving state authority to protect our residents from vehicle pollution. Strong vehicle standards protect our communities from unnecessary air pollution and fuel costs, and they address the largest source of carbon pollution in the United States.

“We commit to continue working together to support a strong national standard and issue the ‘Nation’s Clean Car Promise.’

“We call for a common-sense approach that protects the role of states at the negotiating table and establishes a strong, national standard that:

“Implementing one strong, national standard as outlined in the Nation’s Clean Car Promise is in the best interest of states, automakers and consumers. It also shows the world that America is a leader on transportation and environmental protection. We will not compromise on our responsibility to protect the health of our communities, our climate, and the savings consumers stand to gain at the pump. We will continue to pursue additional concrete actions to fulfill this duty and defend against any threats.”

Click here to read the full statement from the members of the U.S. Climate Alliance.

“I’m disappointed in the U.S. Environmental Protection Agency’s decision to replace the Clean Power Plan with the Affordable Clean Energy (ACE) Rule, which removes a strong incentive for states and the Federal government to work together to protect and improve air quality.

“Delaware citizens and our economy will be negatively affected by the ACE Rule. Rising average temperatures and prolonged heat waves pose critical health risks to Delaware farmers, outdoor workers, children, and the elderly. Changing climate conditions will increase local levels of particulate matter and ground-level ozone, which increase the risk our residents face of premature death and chronic heart and lung problems, and many of these pollutants are transported from states to the west of us. These threats will only increase if we do not take a stance as a nation and a global community to reduce the human emissions of greenhouse gases that feed rapid climate change.

“We must reduce greenhouse gas emissions to address climate change and the dangers it poses to all of us.”