To lure consumers to these fake websites, fraudsters send spam text messages and emails purporting to be from an SWA and containing a link. The fake websites are designed to trick consumers into thinking they are applying for unemployment benefits and disclosing personally identifiable information and other sensitive data. That information can then be used by fraudsters to commit identity theft.

Schemes that use links embedded in unsolicited text messages and emails in attempts to obtain personally identifiable information are commonly referred to as phishing schemes. Phishing messages may look like they come from government agencies, financial intuitions, shipping companies, and social media companies, among many others.

Carefully examine any message purporting to be from a company and do not click on a link in an unsolicited email or text message. Remember that the Delaware Department of Labor generally does not contact you to ask for your username or password. When in doubt, contact the entity purportedly sending you the message, but do not rely on any contact information in the potentially fraudulent message.

The Delaware Department of Labor does use Facebook to inform the public of changes, updates, and general information regarding the agency. You can find our official Facebook page at

Our Facebook page has been verified by a “Blue Check Mark,” immediately following our page name as it is listed on the Facebook page. We will never request your username, password, social security number, full address, etc.. over the Facebook platform.

You may also contact the National Center for Disaster Fraud (NCDF) by calling 866-720-5721 or using the NCDF Web Complaint Form found at www.justice.gov/disaster-fraud.

If you believe you may have entered information into a fraudulent website, resources on how to protect your information can be found at http://www.identitytheft.gov.

To read the full press release from the United States Department of Justice visit https://www.justice.gov/opa/pr/justice-department-warns-about-fake-unemployment-benefit-websites

To learn more about identifying and protecting yourself from phishing attempts, go to https://www.consumer.ftc.gov/articles/how-recognize-and-avoid-phishing-scams or https://www.fbi.gov/scams-and-safety/common-scams-and-crimes/spoofing-and-phishing.

For more information about the Consumer Protection Branch, visit http://www.justice.gov/civil/consumer-protection-branch.

(Wilmington, DE) – The Delaware Department of Labor announced today that Delaware has already begun offering the Federal-State Extended Benefits program for those who have exhausted their previous unemployment benefits.

Delaware’s most recent insured unemployment rate (IUR) exceeded the 5.0 percent threshold and exceeds the 120 percent of the corresponding average rate in the prior two years that triggered the state onto a 13-week Extended Benefit period.

Upon exhaustion of regular UI Benefits and PEUC entitlement, the Delaware Department of Labor will issue written notification to all individuals who are eligible to apply for the new extended benefits program. The weekly benefit amount (WBA) under the program is the same as the individual received for regular unemployment compensation. In addition, those eligible for extended benefits will receive an additional $600 Federal Pandemic Unemployment Compensation, but only through July 25, 2020.

The first group of claimants exhausting their PEUC benefits with eligibility to receive extended benefits starting June 28, 2020 after they filed an initial application and completed the weekly certification. All eligible claimants receive written notification from the Delaware DOL that specifies they can apply over the phone by calling the Unemployment TeleBenefits Hotline at (800) 794-3032, (302) 761-6576, or online by visiting https://ui.delawareworks.com.

In accordance with the Governor’s amended State of Emergency declaration, the Honorable Cerron Cade, Secretary of Labor for the State of Delaware has issued new guidelines to enhance the flexibility of Delaware’s unemployment insurance program to provide cash assistance to many Delaware workers whose employment has been impacted directly by coronavirus [COVID-19] and who would not typically qualify for benefits.

The new Unemployment Insurance guidelines to be issued by the Secretary of Labor are as follows:

Although DOL offices will be closed to public access during this State of Emergency, the Delaware Department of Labor remains operational and offers the ability for Delawareans to file for unemployment benefits online at the following link: https://ui.delawareworks.com/ Questions can answered via email at uiclaims@delaware.gov or via at 302-761-8446.

Delawareans with questions about coronavirus [COVID-19] or their exposure risk can call the Division of Public Health’s Coronavirus Call Center at 1-866-408-1899 or 711 for people who are hearing impaired from 8:30 a.m. to 8:00 p.m. Monday through Friday, and 10 a.m. to 4 p.m. Saturday and Sunday, or email DPHCall@delaware.gov. For the latest on Delaware’s response, go to de.gov/coronavirus.

The Delaware Department of Labor Fox Valley location in Wilmington will no longer offer “counter service” for unemployment insurance claims beginning January 22, 2019. All unemployment insurance claims will be filed using the streamlined process available online at https://ui.delawareworks.com. Individuals can file a claim using any computer or smart phone without the inconvenience of travelling to one of our offices.

All other divisions at the Department of Labor will remain the same – Employment and Training, Industrial Affairs, Vocational Rehabilitation will still offer workshops, appointments, and services onsite using the same delivery and processes.

This process for unemployment claims is more efficient, saves time for the unemployed worker (the claimant) and offers the ability to file at home on a computer or smart phone. A claimant can use any computer with internet access. Claimants can apply:
• on their home computer or any public computer
• on your mobile phone
• at any public library
• current Department of Labor locations will continue to have self-service computer workstations (kiosks). Staff will be available for assistance.

The option for claimants to file a new claim online has been available for years. Delaware is one of only two states that still offers the traditional “unemployment line” with in-person claims handled from the counter. This option generally takes longer and requires documentation.

How to file
The claimant who wants to file for benefits needs the following information to apply:
• Social security number
• Last 18 months of employment history

As part of the process, claimants are required to register with the Division of Employment and Training http://joblink.delaware.gov.

Secretary of Labor Cerron Cade said, “This is just one piece of the puzzle as we continue to modernize the Department of Labor and improve our many services to tax payers.” 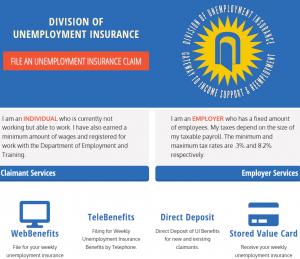 Economy on the Mend, More Work Ahead

In January, Lt. Gov. Denn spoke to the Greater Kent County Committee about how Delaware moves ahead after coming back from the worst economic crisis to hit the state since the Great Depression. In three editorials over the next few months, he will share his thoughts regarding the economy, controlling business costs and education.

The national Bureau of Labor Statistics put our unemployment rate in Delaware at 6.5 percent in November. That’s the best it’s been in five years — it essentially puts us back to where we were when the national economy crashed in late 2008. Some people say that number is deceptive because the labor force is smaller now, but the labor-force number goes up and down over time — our state labor force today is larger than it was in November, 2010.

Are we the best in the country? No. Are we even close to satisfied with being the best in the region? Absolutely not — we won’t be satisfied until every Delawarean who wants work can find it. But as we look ahead to determine how we will build on our success, we should appreciate how far we’ve come and the better place from where we start.

When we are at our best in Delaware in creating economic opportunity, we are doing three things well. First, we are making our state an attractive place for anyone to do business. We recognize that no one — least of all government agencies — bats a thousand guessing winners and losers in these unpredictable economic times, and we have to make sure that the fundamentals of our economy are such that we are an attractive place to move and grow for all types of employers.

Second, while we are strengthening our overall profile as a state to do business, we need to be smart about those economic areas where we have, or could work to have, strategic advantages, and pay special attention to those areas.

And third, when there are particular companies that are interested in locating or expanding here and offer the real prospect of putting Delawareans to work, we need to be extremely responsive to them. We can’t lose our focus on any of these three areas — it doesn’t matter, for example, how nimble or responsive we are to potential new employers, if the underlying economic environment in our state isn’t attractive to them.

Working with Chairman Gary Stockbridge, I recently announced that the state’s Workforce Investment Board is seeking permission from the federal government to implement a new program that would dramatically increase the workforce training funds made available to small businesses willing to hire and train new employees, and all businesses willing to hire and train Delawareans who have been unemployed for long periods of time.

If approved by the United States Department of Labor, the new program will allow the state to pay 90 percent of a new employee’s wages if that employee is hired by a business of 50 or fewer people or the new employee has been unemployed for over 26 weeks.

The program would be funded with existing federal workforce investment funds. The subsidy would last as long as the employee was receiving specialized training from the employer, and employers participating in the program would be required to demonstrate a commitment to keeping employees in the workplace after the expiration of the grant.

The program already exists in Delaware, but because it requires a 50-percent salary match from employers, it is not widely used.

It is a great opportunity for us to give our small businesses another tool to hire new workers and give them valuable training, and also a way for us to incentivize hiring of some of our neighbors who have been out of work for a long time. The best part is we can do it using job-training money that we already receive from the federal government.

The fundamentals are easily stated but hard to do. The governor and I hear them over and over from employers. Employers want a well- educated and trained workforce — students graduating from high school, college graduates, and adults who have learned skills after finishing school. Employers want a low cost of doing business. They want to be in a state that has a good quality of life — where they and their employees will want to live. And they want a supportive government, not one that necessarily gives them everything they want but one that listens and understands that for business, time is money.

On those fundamentals, we have solid progress to report but still a lot of work to do together.