Wilmington, DE – Emphasizing the opportunity to solve a decades-long problem that has limited educational opportunities for children in the City of Wilmington, Governor Markell today signed two bills that pave the way for redrawing school district boundaries to reduce the number of districts in the City and help families better participate in their children’s schools.

The laws were advocated by the Wilmington Education Advisory Committee (WEAC), which was established by the Governor, at the suggestion of city legislators, to engage the community in Markell’s call to address educational challenges in Wilmington schools. Current and retired teachers, community leaders, parents, and concerned citizens worked on solutions, including a plan to address the now-problematic district lines drawn 40 years ago by a federal judge as part of the desegregation of City schools. 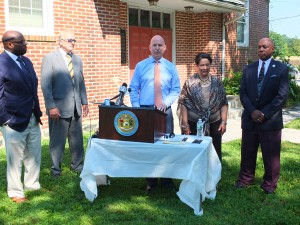 “Forty years of using lines drawn by a federal judge is enough,” said Markell at a signing ceremony at the historic site of Hockessin Colored School #107, famously attended by eight-year old Sarah Bulah before she and her family successfully challenged school segregation. “We should respect the wishes of City children, parents, community leaders, and their elected representatives, and seize this moment of opportunity – a moment when we have more attention on the needs of Wilmington’s children than at perhaps any time in decades.”

WEAC, which issued recommendations that led to the legislation, was created in tandem with Markell’s announcement of the Priority Schools initiative to better support students at the lowest-performing schools in the state, all of which were served youth from struggling Wilmington neighborhoods. The redistricting plan was adopted as a way to not only transform those schools, but also improve the education of students throughout the City.

“We needed to tap into the passions of Wilmingtonians who have a valuable perspective on education in the City, but whose voices are not regularly heard. The Wilmington Education Advisory Committee did just that,” said Markell. “Our initiative to address the inequitable educational opportunities for so many Wilmington youth has turned into something bigger.

“A successful redrawing of district lines will remove the Christina School District from the City and will help more families fully participate in their children’s education. If we are successful, we will see the long overdue end of forty years of busing many students far from their homes – a system that made it difficult for families and the community to engage in their schools.”

The legislation signed by the Governor included Senate Bill 122, which would allow for redrawing school district boundaries in the City of Wilmington. The new lines must be consistent with recommendations of WEAC. The redistricting plan will be developed by the Wilmington Education Improvement Commission, a group established by House Bill 148, also signed today, to advise the state on improvements from schools that have high concentrations of underprivileged students. 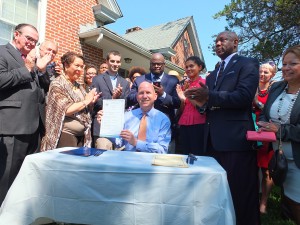 WEIC will also create a transition plan to provide necessary services to affected schools and students and effectively implement school district realignment. The plan must be submitted to the State Board of Education, which must act by December 31, 2015.  It must then be submitted to the General Assembly and the Governor for final approval. WEIC will also monitor the progress of implementation and recommend policies and actions to the Governor and General Assembly to facilitate progress and to promote the continuous improvement of public education on dimensions addressed by the WEAC recommendations

“It is critically important that we take a comprehensive and strategic look at schools in Wilmington in a way that acknowledges the unique challenges and opportunities we have there,” said Senate Majority Whip Margaret Rose Henry (D-Wilmington East). “SB 122 gives education officials an opportunity to redraw school district lines in a way I believe will yield a more well-connected network of schools that will better serve our children.”

“The members of the Wilmington Education Advisory Commission spent hundreds of hours working on this and engaging the public to get us to this point,” said Representative Earl Jaques (D-Glasgow), who chairs the House Education Committee. “I thank them for their diligent work, and now we need to get the Improvement Commission moving forward to make their hard work pay dividends. I have complete confidence that they are going to come up with great ideas to overcome the obstacles out there to make redistricting happen. After that, it is up to the General Assembly and the Governor to enact a plan. Then we will be able to move education in Wilmington forward.”

“I want to thank all those involved in this process for all of their hard work on these issues,” said Representative Charles Potter (D-Wilmington North). “We now have a chance to make a big difference in the lives of so many of our young people and I look forward to working with the new commission, my fellow legislators, and the Governor to get the job done.”

Legislation emerged from recommendations of group established by Executive Order

Dover, DE – Governor Markell issued the below statement following House approval of Senate Bill 122, which would allow for redrawing school district boundaries in the City of Wilmington. The new lines must be consistent with recommendations of the Wilmington Education Advisory Committee, which was established by the Governor to support City students, particularly from the highest need communities. The redistricting plan will be developed by a Wilmington Education Improvement Commission, which would be formed by House Bill 148, which passed the Senate today. That plan would need approval by the State Board of Education and the General Assembly.

SB 122 passed the Senate this week, meaning the bill now heads to the Governor’s desk.

“This bill paves the way for a responsible and careful process to reduce the number of school districts in the City of Wilmington. A successful redrawing of district lines that removes Christina from the City will help more Wilmington families fully participate in their children’s education. It’s time to end forty years of busing many students far from their homes and making it difficult for families and the community to engage in their schools. I thank all of the members of the Wilmington Education Advisory Committee for their hard work in producing the thoughtful proposal that led to this legislation.