The Delaware State Housing Authority and Governor Jack Markell announced Tuesday that 11 projects have been selected to receive $4 million in DDD funding. Delaware’s new grants will leverage $45 million in private investment in commercial and residential development in all three cities.

New projects include the redevelopment of vacant properties to promote homeownership in downtown Wilmington; mixed-use reconstruction on Market Street; new home construction on New Street and Reed Street in downtown Dover; and additional development at The Residences at River Place in Seaford.

Due to significant ongoing interest in the program, DSHA will initiate another DDD funding round this spring. The round will open on March 1, with applications due by May 15.

“We continue to be pleased with the feedback we’re receiving in Dover, Seaford and Wilmington,” said Anas Ben Addi, Director of the Delaware State Housing Authority. “The program is making a difference in all three cities and I look forward to continued work with our new development partners.”

The DDD program, administered by the Delaware State Housing Authority, was created by legislation proposed by Governor Markell and passed unanimously in May 2014 by the General Assembly.

In January 2015, Governor Markell designated the downtown areas of Seaford, Dover, and Wilmington as Delaware’s first three Downtown Development Districts. In the first funding round, announced last April, a $5.6 million investment by the state leveraged $114 million in private investment in all three counties.

To incentivize development, applicants receiving DDD grants are eligible for up to 20 percent of their construction costs in the form of a rebate. Grants are awarded only when projects are complete.

“These town homes will enhance the community but cannot happen without the DDD funding. From the initial kickoff meeting last winter, the DDD program was well planned and executed,” said Michael Maupin, Managing Director of MauTiste Investment Group. “This project will be a great success because of the support of the Delaware State Housing Authority, Dover Mayor Robin Christiansen and his entire staff. It has been a pleasure working with them and I look forward to completing this project and developing others.”

“Governor Markell’s initiative of the Downtown Development District program and what it offers has been the ignitor of what is happening in Downtown Seaford,” said Seaford Mayor David Genshaw. “The City believes in this program and is proud to support it 100%.  We are excited about and look forward to the definite transformation that will occur over the next few years in our community.” 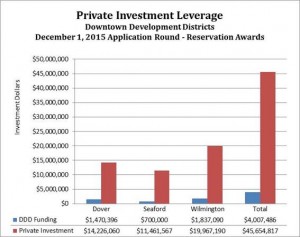 The Delaware State Housing Authority (DSHA), formed in 1968, is dedicated to providing quality, affordable housing opportunities and appropriate supportive services to low- and moderate-income Delawareans. In addition to its role as the State’s Housing Finance Agency, DSHA is unique in that it is also serves as a Public Housing Authority and acts as a Community Development and Planning Agency. As a Public Housing Authority, DSHA receives funding from HUD to build, own and operate public housing in Kent and Sussex counties, two of Delaware’s three counties. For more information about the Delaware State Housing Authority, please call: (302) 739-4263 or visit our website at: www.destatehousing.com